I saved this prompt for Moon Day, today on July 20th.

“Apollo 11 was the spaceflight that first landed humans on the Moon. Commander Neil Armstrong and lunar module pilot Buzz Aldrin formed the American crew that landed the Apollo Lunar Module Eagle on July 20, 1969, at 20:17 UTC. Armstrong became the first person to step onto the lunar surface six hours and 39 minutes later on July 21 at 02:56 UTC; Aldrin joined him 19 minutes later. They spent about two and a quarter hours together outside the spacecraft…. ” ~ Wikipedia.

I remember that day well. I had just graduated from high school and joined some friends at one house to to watch the landing on TV. I remember walking outside and looking up at the moon and then back into the house to see the astronauts on TV and thinking they both were the same.

We watched the landing after watching the lift off a few days earlier. We watched Armstrong take the first step onto the moon saying, “That’s one small step for [a] man, one giant leap for mankind.” 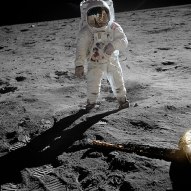 I have no doubt that this event caused a lot of my peers to investigate science education and occupations. Yet, even today, 50 years later there are still people who believe this is a hoax, and those who even believe the earth is flat.

One thought on “Reminiscences: Musings in Memoir — Prompt #6: Space”

Unleashing the beauty of creativity

She designed a life she loved...

Custom Paper Art for All Occasions

"I have enough time to rest, but I don't have a minute to waste". Come and catch me with your wise words and we will have some fun with our words of wisdom.

reflections on what life gifts you

A page about BJDs for the uninformed

Continuing Adventures of a New Submissive

Everything about the Nudist/Naturist lifestyle

An Adult little girl carrying on with her Daddy in Heaven

A blog with an Indian prespective

of life married to a deviously dominant madman!

The pagan path. The Old Ways In New Times

This Carbon Based Life

Falling through the universe at the speed of life

Musings on, and sometimes in, the Irish language

Thoughts, writings, social commentary, and some photography by David Mei. Warning intended for an adult audience if you are not the age of majority where you live, leave now.

The Wolf in the Night Sky

A Blogspace for a Daddy Dom

Finding Strength in my Submission

self discovery through photography

Twinez
Me Against Myself

Ingredients for a Beautiful Life!

Linda B. Myers, Author
Do As I'm Doing
All about Toni Dolls